History and Significance of Raksha Bandhan 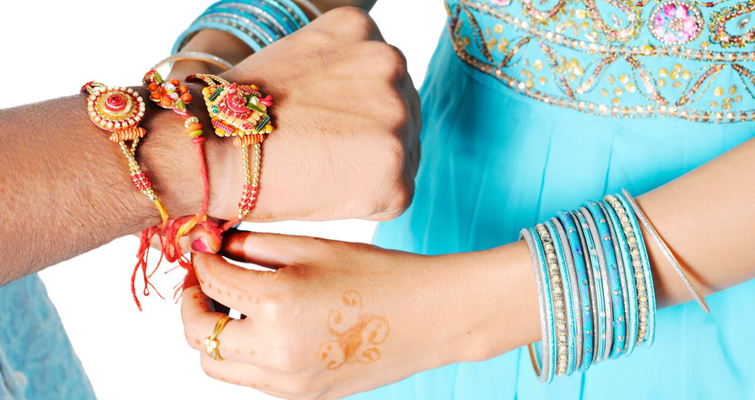 Raksha Bandhan is a term from the Hindi language which means a relationship or an association based on protection. This is a festival which has a long standing Indian heritage. More commonly known as Rakhi, this Indian festival signifies the sacred bond of love between a brother and sister.

The Changing Face of Raksha Bandhan

Rakhi, though considered by some as having a religious origin. But, there have been many occasions in history that have emphasized the relationship between a brother and a sister more than the religious side of it. Gradually, over the centuries and over time Rakhi has lost its original outlook that made everyone associate it with the Hindu religion.

As with other Indian festivals, Rakhi also follows the festival calender that is completely based on the weather changes and their significance in the lives of people. Rakhi has a rich Indian mythological base. Many historically significant epics are related to the origin and the subsequent development of Raksha Bandhan. The festival also finds a mention in most of the epics and its origin can be traced to as far back as the Pouranik times.

Alexander, the great (as he was called) was on a mission to conquer the world. On his crusade through the Indian subcontinent somewhere around 300 B.C., King Alexander of Macedonia was shaken by the fury of the Indian king, Puru. It was then that Alexander's wife, approached King Puru as a sister. On Alexander's next attempt, King Puru, as a tribute to the sacred bond of Rakhi, did not oppose King Alexander and let him have his way.

One of the most popular tales that come to our minds when we think of Rakhi is that of Rani Karnawati and Emperor Humayun. This dates back to the medieval era when Rajputs were fighting Muslim invasions. When Rani Karnawati, the widowed queen of the king of Chittor realised that she could not defend the invasion by the Sultan of Gujarat, Bahadur Shah, she sent a Rakhi to Emperor Humayun. The Emperor, touched by this gesture of sisterly love immediately set off with his troops to defend Chittor's honour.

Legend goes that during the war that Krishna fought and won against the evil King sari wherein he killed sari, Krishna was hurt and and his hand was bleeding. Seeing this, Draupadi tore a strip of cloth from her sari and tied it around his wrist. Lord Krishna, seeing her affections and realising her concerns about him, declared himself bounded by her sisterly love. He also promised that he will be at her side whenever she needed a brother. Many years later, when Pandavas lost Draupadi in a game of dice and Kauravas were removing her sari, Krishna helped her. He did so by continuously adding to the length of her sari and thereby saved her from a public disgrace.

Mahabali, the demon king was also a great devotee of Lord Vishnu. It was thus that Lord Vishnu, left Vaikuntham, his dwelling to protect Bali's kingdom. But, Goddess Lakshmi (Lord Vishnu's wife) became sad because of the Lord having left her alone. So, she went to Bali as a Brahmin woman and took refuge as in the King's palace. On Shravana Purnima, she tied a Rakhi on King Bali's wrist. She then revealed her true identity and told the King of her real reason for coming. The king was touched by Her and Lord Vishnu's good will and affection towards him and his family. Following which Bali requested Lord Vishnu to accompany her to Vaikuntham. It was thus that the festival of Rakhi also came to be known as Baleva (as a reference to Bali's devotion to Lord Vishnu).